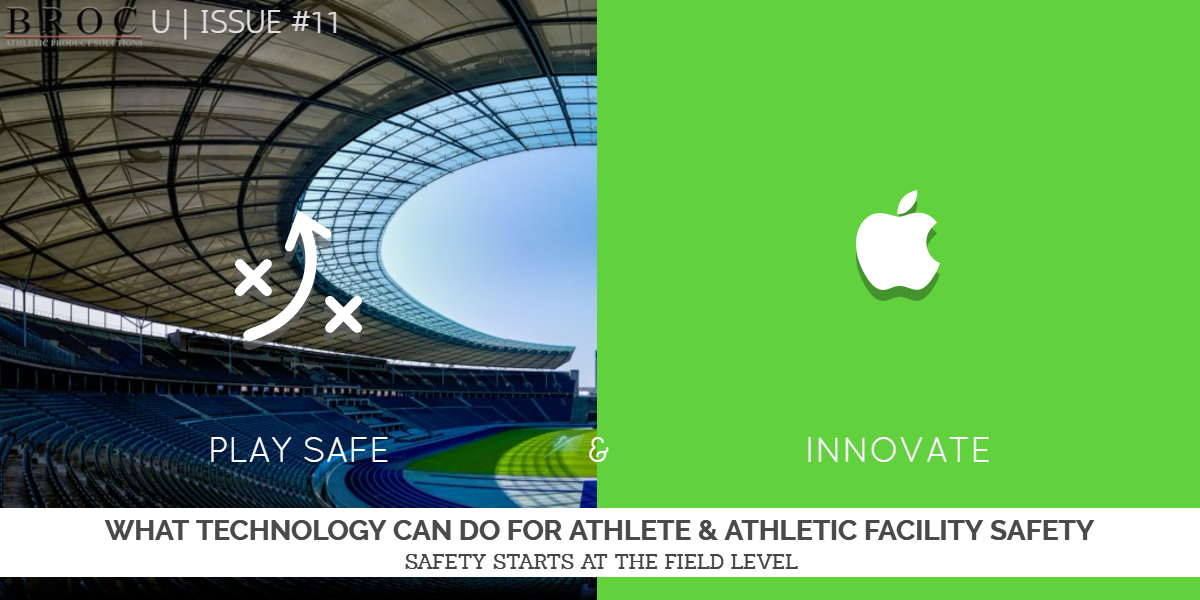 The roots of athletic facility safety are in the activity of playing the sports that these facilities house. In addressing that specific topic, technological advancements are constantly being made to address continued concerns. One sport this has recently become a hot topic is in football where significant impact takes place at all levels of play. We first must dive into the equipment that protects the athlete to better understand how to improve the safety of the equipment that resides in the facility.

In this high-tech age, some schools have been looking at advances in technology in an attempt to make tackle football safer. One example is the St. Thomas Aquinas High School in Fort Lauderdale, the home of the St. Thomas Aquinas Raiders. St. Thomas is renowned for having produced more pro players than any other US high school. It wants to be in the vanguard of school football safety while still maintaining its teams’ championship status.

St. Thomas bought Riddell SpeedFlex helmets at a price of nearly $400 apiece. These helmets have a shell made out of a polycarbonate material. They have extensive internal padding, inflatable bladders, and a cutout on the crown designed to flex upon impact and disperse pressure. Many other schools and school districts (such as the Omaha Public School District) have also adopted the Riddell helmet.

The Riddell helmet is equipped with sensor pads inside the helmet. These sensors are synced up to a hand-held device carried by the trainer. If a hit or series of collisions exceeds a predetermined threshold, the device will alert the coach that the player may have suffered a head-rattling impact. There are only so many sets of eyes on a football field, and these sensors allow a coach to have eyes on every single kid.

Studies show that sports practice sessions are a major source of concussions. To make practices safer, St Thomas acquired two human-sized robots on which players can practice tackles. Mobile Virtual Players (MVPs) are a little under six feet tall, weigh approximately 190 pounds, look like pillars of black foam, and cost approximately $8,000 each. An MVP can run across the field at twenty miles per hour and complete a forty-yard dash in five seconds. Defensive linemen can knock them over all they want (if they can catch them) and the robots won’t get injured.

St. Thomas has been participating in a research project run by the University of Miami. The player wears “concussion goggles” equipped with two high-resolution cameras that can detect symptoms of a brain injury in a matter of minutes.

The Helmet of the Future?

Football helmets were originally designed to deal with skull fractures and brain hemorrhages, not to prevent concussions. This is why some researchers are looking to completely change the approach to football headgear. The Zero1 helmet was developed by a start-up company naming itself VICIS (Latin for “change”) in conjunction with the University of Washington. The Zero1 is designed with an outer shell that is soft and will deform on impact. It incorporates a column-like inner structure that absorbs an impact and disperses its force.

Not all researchers are trying to recreate the entire helmet. Professor Vijay Gupta at the Henry Samueli School of Engineering has developed a liner designed to reduce g-forces and therefore the impact on the brain. The liner uses material that Gupta initially created to bind steel and composites used in building Navy ships. The liner is so thin that it's unnoticeable and early tests have shown that it could slash concussion rates by 25 percent.

Football players also suffer leg injuries. The NFL is working to reduce lower body injuries with better-fitting shoes and cleats. Each player's feet are scanned by a specially-designed laser in order to find the best size and shoe type for each player.

Technology marches on and who knows what significant developments are coming down the road. By adopting the latest safe practice techniques and investing in innovative technology, schools can make school football safer. However, it’s also important that a school’s athletic facilities and equipment have the highest standards of safety. This is why when BROC designs a school outdoor stadium or indoor sports facility, the safety of the athletes and spectators is uppermost in the company’s mind. BROC also understands the importance of regular safety inspections. For more information about BROC services contact us.